It is widely recognised that one of the best ways of improving your flying skill is to participate in competitions. Below are the details of the most popular local and national competitions.

The Dales club participates in the popular national cross-country league for hang gliders (www.uknxcl.co.uk) and paragliders (www.xcleague.com). Registration is free for the hang glider league and for the Dales aspect of the paragliding league in which any distance of over 5km flown from a Dales site counts. The national aspect of the paragliding league requires a modest registration fee which contributes to the annual prizes and running costs. Unique and much coveted Dales XC mugs are awarded each year for cumulative distances of 50km and upwards.

On a national level the British Paragliding Cup, which usually holds a round near the Dales each year, is where you can sharpen your XC skills in more formal but friendly tasks, pitching individual pilots

against each other. There is usually a group from the Dales representing the club at each round.

The British Championships represent the top national-level paragliding competition, and although it has largely given up on the weather in UK, is always represented by Dales’ pilots. See www.pgcomps.org.uk for more information.

In hang gliding terms a round of the British Open Series (BOS) is normally held each year in the Dales and details can be found at www.bos.bhgcomps.uk.

The club presents a number of awards, normally at the farmers’ dinner or a club night in the spring. Members are invited to submit nominations for ‘Cock of the Dales’ and the ‘Fairbrother Trophy’. 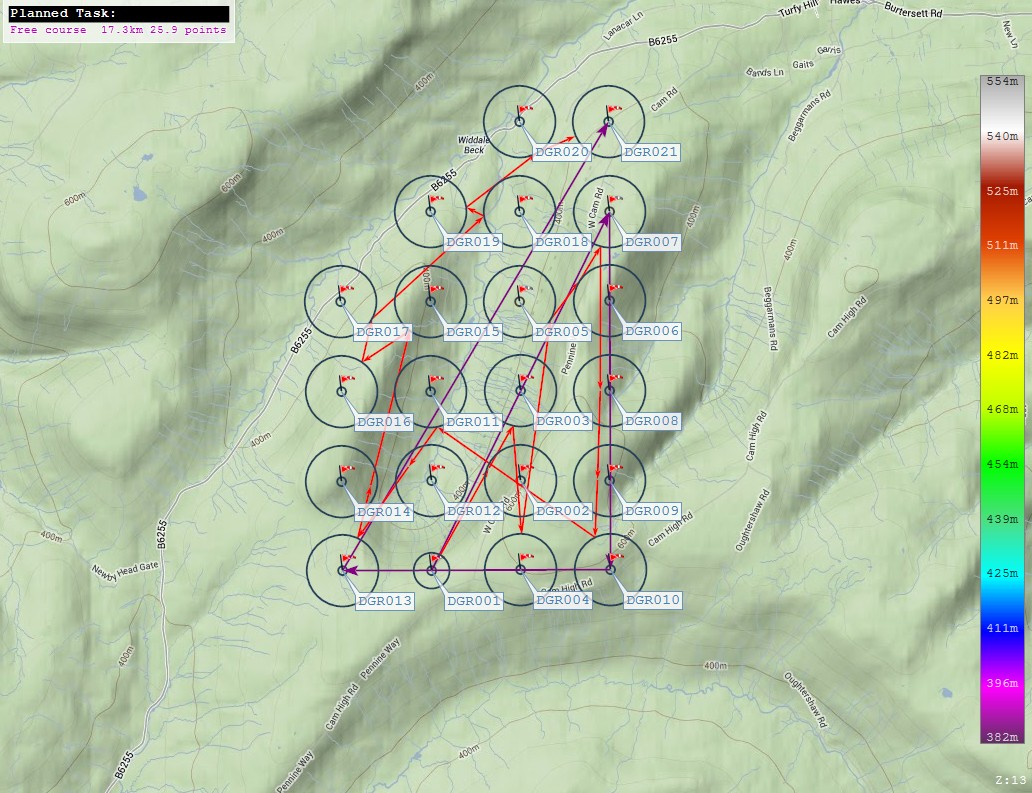 Inspired by the Parlick Grid Challenge, DHPC are proud to present the Dodd Grid Challenge. The concept is simple, take off, and then try to achieve at least one tracklog point in each cylinder, in numerical order. We think most of the cylinders up to about number 12 could just about be achieved with dynamic lift alone, but the rest would need some thermal assistance. Some of the later ones may be tricky....

Cylinders are all 400m except for no.1 at 200m. All cylinders are centred on British national grid squares, so the distance between adjacent centre points is 1km.

The competition will run over each calendar year, with the yearly winner being the pilot scoring the greatest number of cylinders in sequence. In the event of a tie, the leader will be the pilot scoring most recently... so if somebody beats you, have another go and try to do better.

Download the waypoints below (right-click and select "Save target as" or "Save link as"):

Use GPS babelfish to convert formats if required: http://www.gpsvisualizer.com/gpsbabel/gpsbabel_convert

By downloading the waypoints pilots acknowledge that the decision to participate in the challenge, take off and fly, and responsibility for judging whether flying conditions are suitable, is entirely their own.

To score, email your tracklog to Turn on JavaScript!

The club has a unique challenge: to fly a loop around all of the Yorkshire Three Peaks - Whernside, Ingleborough and Pen-y-Ghent.  It's only been successfully completed once on a paraglider and once on a hang glider, although a couple of top pilots have been caught out by a technicality.  If you want to give it a go study the rules carefully.

New for 2018 is the Northern Challenge Trophy (NCT) which is an informal paragliding competition based on pre-defined tasks covering the area of all the local clubs.  Tasks are attempted at a pilot's convenience and vary between grid challenges, cat's cradles, triangles and hike and fly routes of varying size and difficulty.  Details can be found via www.xcmap.net including rules, an explanatory presentation, task files ready for various instruments and a handy wind rose.

Most years a fun event on Baildon Moor called the Baildon Sod is undertaken. It takes the form of a gliding task, in which each competitor attempts to fly as far as he/she can in a straight line or dog leg, to perform a stand-up landing within two glider spans of a predetermined line out from the hill.

The coveted prize 'The Baildon Sod' symbolises a turf cut from beneath the boot of the winner at the winning touch-down. Conditions should be nil wind or very light for the best fun to be had. Keep an eye on the website for details.

The landowner has refused permission for us to park here, bottom land or to fly the NW face.  The area is...

No XC flights over the back between Aug 12th - Dec 31st inclusive (shooting season).

No XC flights over the back between Aug 12th - Dec 31st inclusive (shooting season). DHPC members only. The "12...